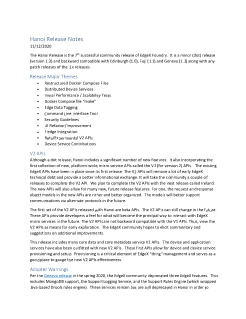 The Hanoi Release is the 7th successful community release of EdgeX Foundry.  It is a minor (dot) release (version 1.3) and backward compatible with Edinburgh (1.0), Fuji (1.1) and Geneva (1.2) along with any patch releases of the 1.x releases.

Although a dot release, Hanoi includes a significant number of new features.  It also incorporating the first collection of new, platform-wide, micro service APIs called the V2 (for version 2) APIs.   The existing EdgeX APIs have been in place since its first release. The V2 APIs will remove a lot of early EdgeX technical debt and provide a better informational exchange. It will take the community a couple of releases to complete the V2 API.  We plan to complete the V2 APIs with the next release called Ireland. The new APIs will also allow for many new, future release features. For one, the request and response object models in the new APIs are richer and better organized.  The models will better support communications via alternate protocols in the future.

The first set of the V2 APIs released with Hanoi are beta APIs.  The V2 APIs can still change in the future. These APIs provide developers a feel for what will become the principal way to interact with EdgeX micro services in the future. The V2 APIs are not backward compatible with the V1 APIs. Thus, view the V2 APIs as means for early exploration.  The EdgeX community hopes to elicit commentary and suggestions on additional improvements.

This release includes many core data and core metadata service V2 APIs.  The device and application services have also been outfitted with new V2 APIs.  These first APIs allow for device and device service provisioning and setup.  Provisioning is a critical element of EdgeX "thing" management and serves as a good place to gauge the new V2 APIs effectiveness.

Per the Geneva release in the spring 2020, the EdgeX community deprecated three EdgeX features.  This includes MongoDB support, the Support Logging Service, and the Support Rules Engine (which wrapped Java-based Drools rules engine).  These services remain but are still deprecated in Hanoi in order to maintain backward compatibility.  EdgeX adopters should make plans to move away from these services. The community will remove these in an upcoming major release (currently forecast for the Ireland release in the spring of 2021).

Please see the Issues List in EdgeX Foundry Github repositories for known bugs.  In any repository Issue List, look for issues with the “Bug” label – such as https://github.com/edgexfoundry/edgex-go/labels/bug for bugs in the main repository of edgex-go.

Core and Supporting Services (along with common modules)

Those in bold are new with this release

Available functions as part of the application functions SDK.  Those in bold are new with Hanoi.

Example Open Source Application Service Connections.  Those in bold are new with Hanoi