The EdgeX has selected GitHub as the code management repository for the project. GitHub is a web-based Git or version control repository and Internet hosting service. It offers all of the distributed version control and source code management (SCM) functionality of Git as well as adding its own features. It provides access control and several collaboration features such as bug tracking, feature requests, task management, and wikis for every project.

If you are completely new to GitHub then the Hello World project is a time-honored tradition in computer programming. It is a simple exercise that gets you started when learning something new.  By following the GitHub hello world example you will learn how to:

Contribution Guidance - Top 4 things to do (or not do)

While this document and the others on our Wiki site provide a lot of great guidance to developers planning to make contributions to the project, we would ask that developers (and the maintainers/committers) of the project pay particular attention to the following "top 4" practices and adhere to them closely when working on project repositories.

2.    Provide a message body to the commit to provide more detail explanation.  When you do, keep lines in the body to 72 characters or less.

You can add a commit subject line and multiple message bodies like this:

3.    Commit your changes in logical chunks.  Make it easier for the community to review, comment on, and accept your contribution.  For example, create a separate commit for a big fix and an enhancement.

4.    Rebase the upstream development branch into your topic branch.  Do not merge master into your local PR branch (this is the lazy approach to dealing with committed code locally in a branch, and then realizing that your PR isn’t merge-able because HEAD has changed).  See https://git-scm.com/book/en/v2/Git-Branching-Rebasing if you need more help.

The types and scope will vary per repository.  The following is the current standard as of 2020-09-24

Hello core working group members.  Per the Core WG meeting today, I am looking for feedback on our upcoming adoption of conventional commits specification across repositories under Core WG purview.  Thanks to Mike Johanson, the types and scopes for edgex-go are to be set at these:

For the other repositories, I propose the following.

edgex-examples
types: feat (for feature), fix, docs, style, refactor, perf (for performance), test, build, ci, revert
scopes: app (for app services), device (for device services), temp (for templates), security, all, or no scope if it does not apply to these

Please weigh in with any other changes or additions.  We'll resolve and adopt with next week's meeting.

Examples of proper messages (in the context of sample  Git CLI commands) are:

The body of the commit should contain a reference to issue that is addressed (closes and/or fixes).  Example:

The EdgeX GitHub organization has been configured such that all repositories it hosts have been setup with branch protection in place. This requires new contributors to fork a project repository and work on a local copy before submitting a Pull Request so that any new changes get merged back into the master project repository on GitHub. It is not an option for a committer to just clone the repository and push changes directly back to it.

3.      Configure Git to sync your fork with the original repository.

4.      Add a remote reference so that Git can sync your fork with the master project repository.

A detailed example illustrating these steps is provided here.

From this point the basic workflow is as follows:

a.      explicitly add individual file changes in your working directory to you index.

b.      use the git commit -a to automatically stage all tracked, modified files before the commit If you think the git add stage of the workflow is too cumbersome. This basically tells Git to run git add on any file that is "tracked" - that is, any file that was in your last commit and has been modified.  Please use caution when using this approach as it's easy to accidently commit files unintentionally (eg. build artifacts, temp files from editors, ...).

The -s option used for both alternatives causes a committer signed-off-by line to be appended to the end of the commit message body.  It certifies that committer has the rights to submit this work under the same license and agrees to our Developer Certificate of Origin (see Contributor's Guide for more details about our DCO). E.g.

In order to use the -s option, you need to make sure you configure your git name (user.name) and email address (user.email):

5.      Create a Pull Request. This is a formal request for the project's maintainers to review the diff and approve/merge, or possibly request that changes be made.

8.      Rebase the changes from upstream/master into your local master branch. This brings your fork's master branch into sync with the upstream repository, without losing your local changes.

Note: it was suggested  to use git checkout master, then git pull origin master in preference to above (to be discussed).

11.   Repeat the steps above as appropriate

12.   If a change was requested on the new-feature PR then simply rebase your working branch from upstream:

14.   Update the PR killing off the older changes.

By using the --amend and --force options means that any of the commits that you produce should be clean, non-breaking changes at all times that get merged in, instead of having a set of patches in a PR that may have one or two 'fixup' changes.

A GitHub issue should normally be filed for any bug discovered in EdgeX services, code or documentation flaw (with the exception of those situations noted below) and prior to any PR to fix the bug is submitted.  When submitting a PR to fix the bug, the issue should be referenced as a "fix:" (the Conventional Commit fix type) for the bug in the commit comments (see Commit Message guidelines).

No bug issue is required for:

Issue creation for new features is suggested, but not required.  Issue creation for features or enhancements is at the discretion of the contributor and typically done in consultation with the affected work group chairperson(s).  Issues can be a good way to

The EdgeX project has adopted the GitHub Flow workflow, a lightweight, branch-based workflow that supports teams and projects where deployments are made regularly.

GitHub Flow is in a nutshell:

Identifiers from corresponding tickets in an external service (e.g. a GitHub issue) are also good candidates for use in branch names. For example:

Use hyphens to separate words.

Note: While working alone on a local branch that has not yet been pushed, it's fine to use commits as temporary snapshots of your work. However, it still holds true that you should apply all of the above before pushing it.

Follow the seven rules below and you shouldn’t run into any problems.

The seven rules of a good Git commit message are:

Ultimately, when writing a commit message, think about what you would need to know if you run across the commit in a year from now.

That said never rewrite the history of the "master" branch or any other special branches (i.e. used by production or CI servers).

When committing during the process of PR reviews, try to keep the commit history to make it easier for reviewers to see and follow the prior feedback conversations.  This means that, in general (subject to discusssions between committers and reviewers), don't squash the commit history until the PR is approved.  Also, don't force push the updates during the review/feedback process.  Instead, when making commits during the review process, follow the following commit process:

At the end of the review process, use the GitHub Merge button's options to squash the commit history (see below). 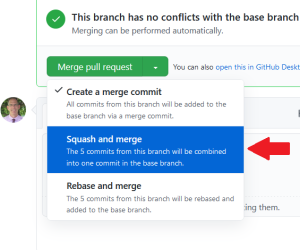 2.    Provide a message body to the commit to provide more detail explanation.  When you do, keep lines in the body to 72 characters or less.

You can add a commit subject line and multiple message bodies like this:

3.    Commit your changes in logical chunks.  Make it easier for the community to review, comment on, and accept your contribution.  For example, create a separate commit for a big fix and an enhancement.

4.    Rebase the upstream development branch into your topic branch.  Do not merge master into your local PR branch (this is the lazy approach to dealing with committed code locally in a branch, and then realizing that your PR isn’t merge-able because HEAD has changed).  See https://git-scm.com/book/en/v2/Git-Branching-Rebasing if you need more help.