EdgeX FoundryTM is a vendor-neutral open source project hosted by The Linux Foundation building a common open framework for IoT edge computing.  At the heart of the project is an interoperability framework hosted within a full hardware- and OS-agnostic reference software platform to enable an ecosystem of plug-and-play components that unifies the marketplace and accelerates the deployment of IoT solutions.

EdgeX is an important enabler for interested parties to freely collaborate on open and interoperable IoT solutions built using existing connectivity standards combined with their own proprietary innovations.

Where does EdgeX Foundry sit alongside the numerous other IoT initiatives?

EdgeX Foundry is focused on the Industrial IoT Edge. Like Cloud Foundry it leverages cloud-native principles (e.g. loosely-coupled microservices, platform-independence) but is architected to meet specific needs of the IoT edge including accommodating both IP- and non-IP based connectivity protocols, security and system management for widely distributed compute nodes, and scaling down to highly-constrained devices.

EdgeX Foundry will benefit industry-specific interoperability efforts and strives to be a unifying force, creating an ecosystem of ecosystems, providing maximum flexibility to unify heterogeneous ingredients.

A key tenet of the EdgeX Foundry Project is to maintain platform independence for maximum scale: 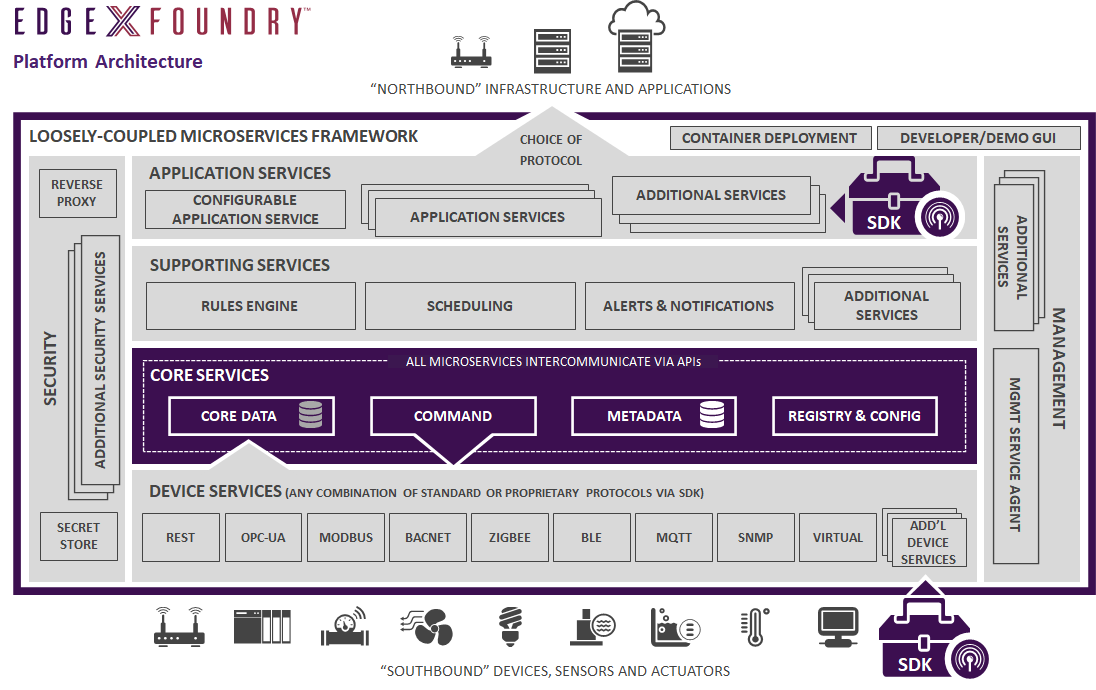 EdgeX Foundry proposes a loosely-coupled tiered IoT architecture by allowing customers to deploy a mix of plug–and–play micro services on compute nodes at the edge depending on the capability of the host devices, where they sit in the solution stack, and the use case. Given six releases in the first three years of the community project, EdgeX is a fully-functional platform that will continue to mature and add functionality.  As an open source, community-driven project, the current architecture scheme will evolve over time.

The architecture supports communications “north, south, east and west” as needed in the IoT “fog” and can be deployed on a variety of edge nodes in a tiered computing architecture.  The deployment of combinations of different plug-and-play micro services simply depends on the use cases and capability of the host device.